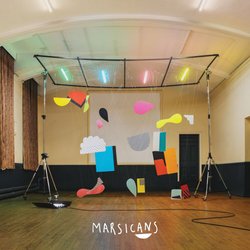 Marsicans have just released the final taste of their album Ursa Major before its debut on 14th August. Plucked straight from the middle of the track list, the Leeds-based quartet have dropped an absolute gem with ‘Someone Else’s Touch’.

A stark contrast to their usual upbeat, colourful tracks, ‘Someone Else’s Touch’ is emotive, and beautiful. The lyrics are raw and honest, perfectly accompanied by James Newbigging’s soft, dulcet vocals.

‘Someone Else’s Touch’ is the oldest song to make it on to Ursa Major, and the band’s bassist and vocalist, Rob Brander, said that ‘it’s also probably the most adventurous song on the record in terms of production’. Describing the creation of the track, Brander says that the song is ‘a moment, and an evening that we will always remember very fondly, and we are all incredibly proud of ‘Someone Else’s Touch’ as a song, and a marker of our perseverance as a band.’

Each element; the vocal riffs, harmonies, tender melody and subtle instrumentation, all blend effortlessly together to create something poignant and elegant.

Whilst we love their usual feel-good tracks, ‘Someone Else’s Touch’ is utterly gorgeous and nuanced. Marsicans have given us a glimpse into their hearts, and we will be blubbering over this track for days.