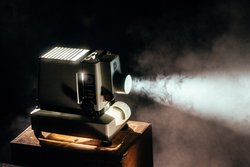 Do the advancements in cinematography decrease the impact that music should have in a musical film?

As stated by Michael Hoffman, musical film is “without a doubt, one of cinema’s most unique genres… which primarily utilizes song and dance routines to advance the narrative.” (Hoffman, 2014). However, when looking at the advancements in cinematography, have these song and dance routines become less significant than the cinematography itself? In a stage musical, the set and choreography are designed to support the songs, whereas film musicals are created in such a way that could be seen to deem the songs as the support act and the visual spectacle as the front liner.

Many film musicals have been adapted from stage productions, replacing the impact of a live performance with visual spectacle created with cinematography, as well as the “inclusion of lavish sets and locations that would be impractical or impossible to duplicate on the stage” (Hoffman, 2014). The Wizard of Oz(dir. Victor Fleming, 1939) is an early example of a stage-to-screen musical which used visual spectacle, arguably, in order to enhance the music. The film was revolutionary and was a wonderful visual spectacle; the mix of sepia toned footage and colour, the scene with Dorothy in the twister, the use of costume and scenery in Oz, all serve as prime examples of this. Though the music, aside from the catchy hooks of “We’re Off to See the Wizard” and “Ding Dong the Witch is Dead”, is arguably overshadowed. The cinematography was so enticing and extravagant at the time of its release, it could be seen to be more memorable and impactful than the music itself. The Wizard of Oz “was the first out-and-out fantasy film musical, receiving Academy Awards for both its score and Harold Arlen’s song ‘Over the Rainbow’” (Cooke, 2008, p. 155). This supports the argument that the music itself is notovershadowed by the visual elements and cinematography, but instead stands apart from it. However, this does not deflect from the magnitude of visual aspects in The Wizard of Oz. As James Fussell states, “they had no computers. No green screens. No Industrial Light and Magic” (Fussell, 2014), which makes one wonder how they created the many visual effects in the film. A. Arnold Gillespie was the special effects artist for The Wizard of Oz, and for the tornado he used a “35-foot-long muslin stocking… wrapped around chicken wire to give it a conical appearance.” (Fricke qtd. in Fussell 2014). This was attached to a crane that was rotated using a motor, and the base of the tornado was attached to a car that the crew moved along a track in the soundstage. They filmed this and projected the footage behind the actors with a wind machine to make the tornado look real. The visual effects in The Wizard of Oz were advanced at the time as nobody had ever seen anything like it before, which arguably distracts from the significance of the music itself. The magic created from the musical numbers before has now been overshadowed by the ‘magic’ of visual effects. However, this intricate and complex filming technique is not used in a section where there is a musical number, showing how the filmmakers put the more advanced cinematographic scenes as standalone pieces of visual spectacle, so as not to diminish the importance of the musical numbers.

Aside from the stage-to-screen musicals, there are many film musicals that have been created specifically for film, such as La La Land(dir. Damien Chazelle, 2016). La La Land is an extremely successful film musical receiving “$223 million at the box office… 14 Oscar nominations” (Alex, 2017), and 6 Oscar wins. The music in La La Land is enjoyable and, importantly, memorable, though the visual spectacle and cinematography is where the amazement lies. Damien Chazelle chose Linus Sandgren as his cinematographer after he had watched American Hussle(dir. David O. Russell, 2013). According to Sandgren, the reason for this was because Chazelle was interested in “camera movement in that film… He knew he wanted the camera telling the story in a physical and interactive way.” (Sandgren qtd. in O’Falt, 2017). Here, Sandgren explains that it is the camera that tells the story, not the music, which could express the significance of cinematography as opposed to the need for music. La La Land could have been as successful as a non-musical film, the musical aspect could arguably be there simply to enhance the visual elements. O’Falt explains that both Chazelle and Sandgren wanted the “camera movement to have a rhythm that would enhance the film’s songs and give the film a heightened, magic feel” (O’Falt, 2017). Chazelle wanted as few cuts as possible, which is technically very challenging, in order to keep all of the movement continuous and uninterrupted. The opening number “Another Day of Sun”, for example, is a single shot scene. The use of this single shot technique hones in on musical theatre itself and emulates the live atmosphere of theatre. “Another Day of Sun” is a heavily choreographed musical number wherein the actors dance on and around cars in standstill traffic as the camera pans around and tracks the different dancers as they move between the cars. The sounds of horns and slamming car doors are rhythmically intertwined with the music, thus showing how the music is the most important aspect, the visual elements are there to elevate it.

Whilst it could be argued that visual spectacle and cinematography are more significant in musical films than the music itself, it is essential to consider the balance between the two. Without the impact that cinematography provides we are left with, essentially, a carbon copy of a stage musical without the impact of being a part of a large audience and seeing the production live. Likewise, without the music, we are simply left with a film, and something like The Wizard of Oz may not have been as magical or immersive without the songs. The nature of film is the visual spectacle of it, which compensates for the lack of a live atmosphere. Musical film intrinsically has its challenges in regard to adapting from stage to screen and “given its stagey nature, it is quite common for the musical to embrace a very escapist version of reality” (Hoffman, 2008). This escapism is created visually through the precise use of camera techniques and the use of set and on location shots.

For the most part, I do not believe that cinematography overshadows music in a film musical. Instead, it elevates it. Music and cinematography in a musical film complement one another and work together in order to create something magic.

Hoffman, M. (2014). The Musical Film Genre: Capturing the Magic of the Stage on the Screen. [online] Cinemablography. Available at: http://www.cinemablography.org/blog/the-musical-film-genre-capturing-the-magic-of-the-stage-on-the-screen [Accessed 15 Apr. 2020].