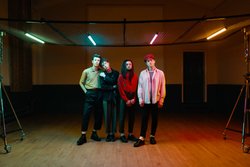 Ursa Major impeccably cements the sheer talent and individuality of Marsicans. Their long-awaited debut album has a gorgeous feel that instantly connects you with the band and their journey.

Structurally, the album is well mapped out; going from an upbeat party vibe to a reflection of a more deep-rooted reality.

'Juliet' opens Ursa Major with a catchy riff. The chorus, bassline, melody and musical composition is wonderfully light and summery.

Slow burner 'Dr Jekyll' contrasts 'Juliet' and 'Sleep Start'. It opens with a few muted pulsing guitar strums, gradually introducing dulcet, breathy vocals, musicals riffs and harmonies that bloom into a roaring flame. 'Summery in Angus' is the ultimate summer anthem. And 'Evie' shifts every preconceived expectation you may have of the band.

'Someone Else's Touch', which I recently reviewed as a single, sits comfortably in the middle of the track-list. Beautifully nuanced, it shows us a different - and very welcome - side to Marsicans. 'These Days', which carries that same vulnerability and exposure but in a very different way. 'These Days' circles topics of social anxiety and depression, which are strikingly juxtaposed with upbeat instrumentals.

Sandwiched between a humorous poem in 'Interlude II' and a whispy instrumental in 'Interlude III', 'Can I Stay Here Forever (pt.ii)' is a heavier track in Ursa Major. The staccato introductory lyrics fit perfectly with the opening guitar riff and powerful drum beat. It is absolutely a track that will come into its own when performed live, and as you can imagine, will quickly become a cult favourite.

'Leave Me Outside' is the penultimate song with layered harmonised melodious vocals which play with unexpected minor notes, lulling you into a dreamlike state. Then suddenly the track is hit with a powerful rush of steady guitar strums and fierce drums. Leave Me Outside is an insanely well-crafted kaleidoscopic track.

The album closes with 'Should've Been There' - a gentle, pleasant song with pulsing instrumental notes and soft vocals. The final number provides a much needed moment to reflect on the captivating journey the album has taken you on. Their connection as a band is unparalleled and comes through every song in Ursa Major. There is not one song on this album that slips under the cracks; each track unequivocally personifies the sound and soul of Marsicans.