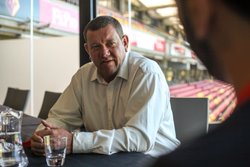 Pride is a funny thing. Some of us feel pride for small achievements, others for momentous ones. Chris Luff, or 'Luffy' as he is known to his friends, has an abundance of pride for other people and his community; indeed, a trait which led him to the honourable achievement of an MBE. There is, of course, more to this story. And, like most beautiful things in life, it all started with a pint.

One night at their local, Chris and his friends Syd Nadim, Dan Dark and Oli Thompson were having, what Chris describes as, 'real first-world-problem discussions', complaining - as we all do - about expenses and luxuries in life. After a brief moment, the four realised that those problems weren't really problems at all, that there are far more significant issues. It was then that The Chamber of Conscience was born. But, let's rewind slightly.

For thirteen years, Chris worked at 'Freedom', an IT company in Watford. Whilst there, it was his goal to employ young people as apprentices and encourage them to volunteer at charities. When they sold the company, Chris was left wondering what his next chapter would entail. Following his own advice to his apprentices, he volunteered at an SEN school. He absolutely adored it, but truly missed the cut and thrust of business.

At the start of lockdown, there was a call to coordinate volunteering. Chris chose to help the front-line workers at Watford General Hospital and called Lee Partridge and Matthew Johnson, an ex-Royal Marine, to create a plan. Chris set up a WhatsApp group and invited people he knew could make things happen for the hospital staff. In the end, 30,000 bottles of water were donated, and hundreds of thousands of coffees and snacks were gifted by Nestlé. Storage soon became their next hurdle.

Chris, a trustee at Watford Community Sports and Eductaion Trust, arranged to use the concourse under the Vicarage Road stands for supplies of donations that the volunteers could then deliver. After working with the Hertfordshire Community Foundation, they extended their donations to the hospices and local charities.

Back at Watford General, NHS staff were exhausted with no access to food due to the hours they worked, and the late nights. Chris and his group provided pastries for the staff. Chris called his good friend Peter Wenzel who answered with, 'what do you need, the answer is yes, I am here'. Wenzel's bakery proceeded to donate over 25,000 croissants and cakes over a six-month period.

The Grove Hotel got involved and staff members Luke Reeves, Stephen Wheeler and Danielle Michaels put a team together and made thousands of meals a month, delivered to Herts hospitals by the WhatsApp team. They then began to provide food to Home-Start families and to the clients of Small Acts of Kindness. Chris and Matt ended up with 80 delivery points.

Chris' family network is precisely why he is the way he is. For over 20 years, Chris' grandfather opened his café every Christmas day free of charge for locals in need. And his mother, 84, still volunteers at local hospitals to care for the elderly. Chris is perpetually 'proud and thankful to [his] parents for guiding [him] in the right direction when [he] was going in the wrong one'.

Chris' late father, Jeff, always said 'do the right thing'. This was a mantra which fuelled Chris' life, and one which he passed on to his two daughters, Rosie and Lucy.

If it were possible to put all of Chris' accolades and experiences on paper, I would instead be writing a novel. The work he and his network have done over the past few years, and notably in the past few months, is astonishing. It must be said that Chris is somewhat embarrassed about this achievement. He is honoured and grateful to receive recognition, though he feels many others are more deserving. Chris will therefore be accepting the award on behalf of the hundreds of people in Hertfordshire who were involved. Without them, none of this would have been possible, and to them, he is eternally grateful.